The hard hat is overdue for innovation.

With so much smart PPE and comfort-driven PPE coming onto the market (think work boots with Wi-Fi and vests that cool), it’s amazing that one piece of safety equipment — arguably the most essential piece — has stayed more or less the same for decades. It’s the hard hat, and it’s overdue for innovation, say many construction safety leaders.

“The standard helmet everyone’s wearing hasn’t changed much in about 50 years,” noted Jason Timmerman, EHS director for Skanska Commercial Development. And, he said, it needs to. “It is only good for something being dropped and hitting you directly on top of your head. It has nothing to do with slips, trip and falls on the same level, where your head snaps backs, or falling off ladder, falling off a wall form. With any type of fall you have, the traditional hard hat will more likely than not fall off.”

While adding a chin strap to a hard hat could help it stay put, helmets being tested and used by Skanska and other construction companies, which come with straps, also offer frontal, rear and side impact protection thanks to foam padding.

Kask, an Italian company better known for its ergonomic bicycle helmets, is one of several companies that have begun manufacturing helmets for use in construction. Skanska currently has between 300 and 400 Kask helmets in the field. “We’ve had rave reviews with these helmets,” said Timmerman.

In April, Clark Construction took the step of rolling out Kask helmets across all its employees — the first and only general contractor to do so.

“Every Clark employee, from West Coast to East Coast, from Clark Construction to our self-perform [division], we’re all wearing the new helmets,” said Seth Randall, division safety director for Clark Construction. That’s more than 3,500 helmets in all. 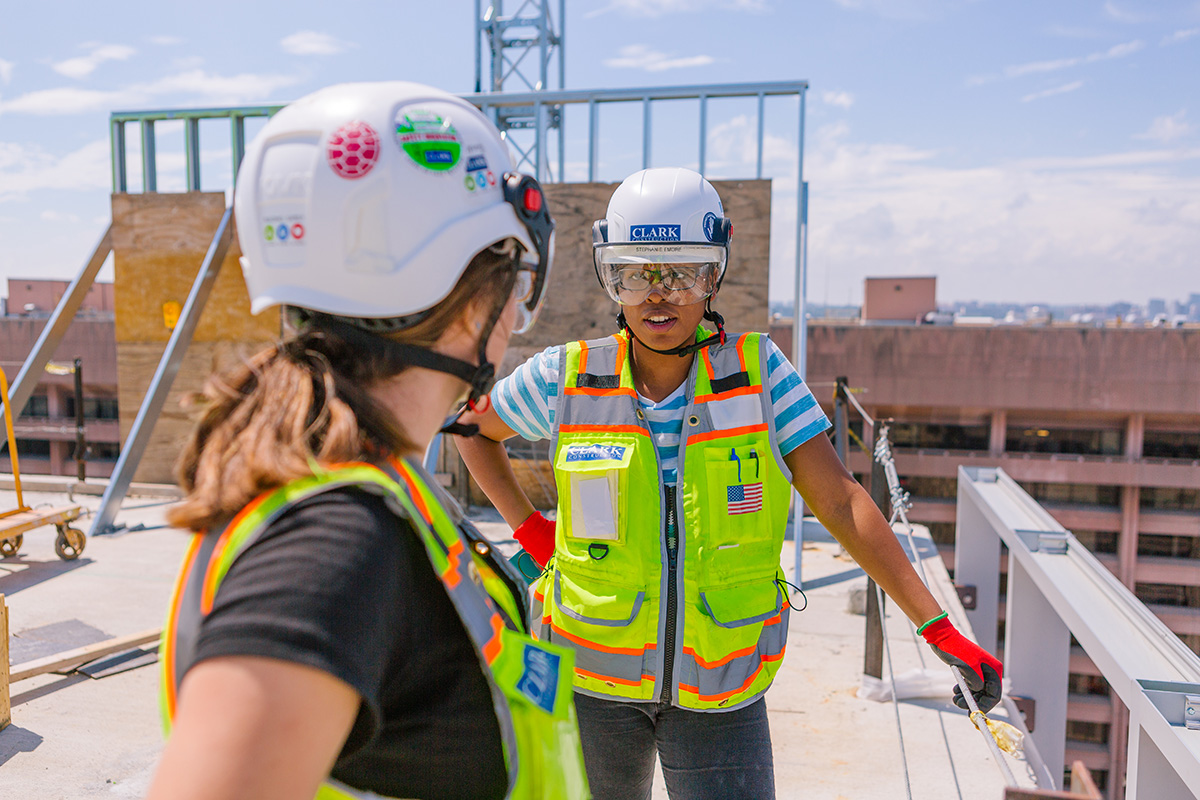 The reason for the switch? Randall pointed out the same lack of protection against falls that Timmerman noted with traditional hard hats. “And because of lessons learned,” he added. “We’ve had a couple incidents that kind of had us open our eyes and say, ‘there has to be something better.’”

Clark uses two types of Kask helmets, the SuperPlasma, which is ventilated, and the Zenith, which is rated for electrical hazard protection. Clark tested several helmet brands before choosing the Kask. “As a comfort fit, the Kask was the best fit for us,” said Randall. Clark even sent Kask helmets to a lab to verify their protection against front, back and side impact.

“We’ve already seen positive results in a couple of incidents that have occurred, that the helmets have potentially saved an employee from any type of head trauma,” said Randall.

For some employees, the helmets, which are larger than hard hats, took some getting used to. “It’s a different type of fit, and some people prefer one or the other, but we are getting positive feedback about the fit,” Randall noted. Clark took pains to educate employees on the importance of wearing the helmets for their safety. “As they wear it, they’re finally realizing that it’s also a lot more comfortable as well.”

One downside to the helmets is their cost, which runs considerably higher than that of traditional hard hats. (The Kask SuperPlasma retails for around $135.) But the price must be put in perspective.

“Is there a cost? Sure, there’s a cost,” said Randall. “But there’s also a cost to an injury when someone does fall.” When you consider those costs and the effect of a head injury on an employee, “it justifies any additional cost to the helmet.”

Other PPE items, he noted, are also not cheap. “We can spend $90-$100 on a nice safety vest as well.” And the head is worth protecting. “If you look at what we wear out in the construction field and you compare money spent on items such as our boots, which protect our feet, why are we not willing to spend the money on a helmet that protects the most important organ in our body?”

Randall said Clark is working on contractual language that would require its subcontractors to use better head protection, if not the actual helmets the company uses. But simply leading by example has already begun to change hearts and minds. “They see the benefit of it, and that’s how we start to change the industry as a whole.”

Research underscores the need for better head protection. A NIOSH report found that traumatic brain injuries represented one-quarter of all construction fatalities from 2003 to 2010. More than half of fatal work-related traumatic injuries were a result of falls, particularly from roofs, ladders and scaffolds.

More research is underway. “NIOSH is doing a very in-depth study on traumatic brain injuries and how they relate to the construction industry,” said Timmerman. “Once their data rolls out, it [will be] interesting to see where the industry moves.”

Manténgase informado sobre las últimas noticias y consejos.
Was this article helpful?
Yes No
10 out of 11 found this helpful